For Fire or Emergency Ambulance

The forms below can help the New Hyde Park Fire Department better assist you in time of need.

All U.S. homes should have working smoke alarms.

Fire injuries and deaths can be prevented. A few easy steps can save your life!

The United States Fire Administration recommends the installation of both ionization and photoelectric or dual sensor smoke alarms. For extra safety, install smoke alarms both inside and outside sleeping areas.

Smoke Alarms—Why, Where, and Which

A smoke alarm is critical for the early detection of a fire in your home and could mean the difference between life and death. Fires can occur in a variety of ways and in any room of your home. But no matter where or how, having a smoke alarm is the first key step towards your family's safety.

This information is not intended to be all inclusive, but it is intended to inform the reader about some of the safety aspects and importance of having and maintaining working smoke alarms.

Why are Smoke Alarms Important?

Every year in the United States, about 3,000 people lose their lives in residential fires. In a fire, smoke and deadly gases tend to spread farther and faster than heat. That's one reason why most fire victims die from inhalation of smoke and toxic gases, not as a result of burns. A majority of fatal fires happen when families are asleep because occupants are unaware of the fire until there is not adequate time to escape. A smoke alarm stands guard around the clock and, when it first senses smoke, it sounds a shrill alarm. This often allows a family the precious but limited time it takes to escape.

About two-thirds of home fire deaths occur in homes with no smoke alarms or no working smoke alarms. Properly installed and maintained smoke alarms are considered to be one of the best and least expensive means of providing an early warning of a potentially deadly fire and could reduce the risk of dying from a fire in your home by almost half.

Where Should Smoke Alarms be Installed?

Smoke alarms should be installed on every level of the home, outside sleeping areas, and inside bedrooms.

A smoke alarm should be installed and maintained according to the manufacturer's instructions. When installing a smoke alarm, many factors influence where you will place it, including how many are to be installed. Consider placing alarms along your escape path to assist in egress in limited visibility conditions. In general you should place alarms in the center of a ceiling or, if you place them on a wall, they should be 6 to 12 inches below the ceiling. 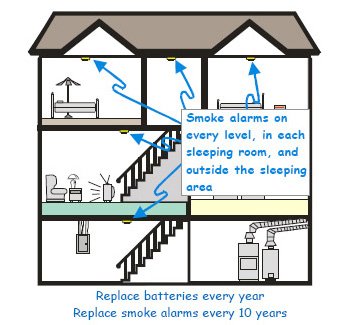 Which Smoke Alarm Type is Better?

Although there are several choices to make in selecting the right smoke alarms to buy, the most important thing to remember is that smoke alarms save lives. For that reason, you should install a smoke alarm if your home does not have one.

There are two main types of smoke alarms, which are categorized by the type of smoke detection sensor, ionization and photoelectric, used in the alarm. A smoke alarm uses one or both methods, sometimes with a heat detector, to warn of a fire.

Ionization detectors contain a chamber with two plates that generate a small, continuous electric current. When smoke enters the ionization chamber, the smoke particles disrupt the current flow, which triggers the alarm.

Photoelectric detectors use a light beam and light receptor (photocell). When smoke is present between the light and receptor, depending on the type of smoke chamber configuration, the reduction or increase of light on the photocell sensor triggers the alarm.

The amount of time a person may have to escape depends on many factors, such as the type of fire, location of the fire, and the closest smoke alarm. 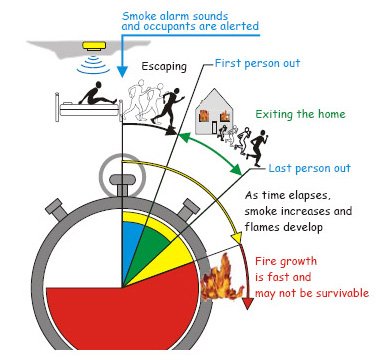 Smoke Alarm Sounds
Do not waste any time saving property. The fire has already developed and the closest smoke alarm has detected the smoke.

Escaping
It may be smoky; getting low may make it easier to breathe and see. Smoke contains toxic gases which can disorient you or, at worst, overcome you.

The time it takes to get out depends on many factors including mobility, helping others, escape route, time of day, smoke, fire, and the location of the fire relative to you.

Exiting the Home
Once you are out of the home, never re-enter the home. ONCE OUT—STAY OUT!

The type of fire, slow smoldering or fast flaming, can determine the amount of time you have to escape before being overcome by smoke, heat, and toxic gases. A slow smoldering fire may go undetected for a long period of time before it erupts into dangerous flames and high heat. A fast flaming fire has a very short amount of time before flames and heat become intense. In either type of fire, once out—stay out.the Home
Once you are out of the home, never re-enter the home. ONCE OUT—STAY OUT!

Fast Moving Flaming Fire
Fast flaming fires don't leave much time for escape. An ionization smoke alarm may be seconds faster than a photoelectric smoke alarm, and those seconds will count in a fast moving flaming fire. 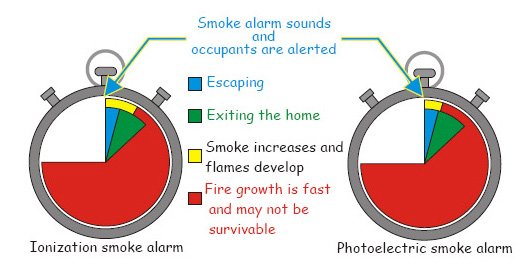 In a flaming fire: 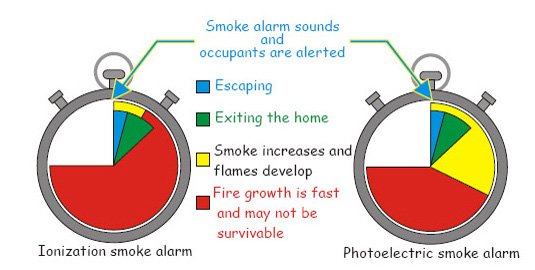 In a smoldering fire:

What Features Come on Smoke Alarms?

In addition to the type of smoke detection sensor, ionization and photoelectric, used in the alarm, smoke alarms can be powered differently or be interconnected or single station alarms. Considering all of the available options will enable you to select the smoke alarms that may work best in your situation to effectively detect a fire.

Power
Smoke alarms can be connected to the home's wiring system, battery powered, or a combination of both. Smoke alarms most often fail to alarm because of missing, drained, or disconnected batteries. A good reminder to replace the batteries in smoke alarms is in the fall or spring when resetting the clocks.

If your smoke alarm begins to chirp, signaling low battery power, replace the batteries immediately to prevent you and your family from being unprotected. Also make sure that everyone in the house understands how important it is to have working batteries in every smoke alarm and how dangerous it is to remove the batteries even for a short time. Smoke alarms with sealed lithium batteries can last up to 10 years; after 10 years, the entire unit is disposable.

Features on smoke alarms for your home:

Which Smoke Alarm to Install?

Because both ionization and photoelectric smoke alarms are better at detecting distinctly different yet potentially fatal fires, and because homeowners cannot predict what type of fire might start in a home, use these guidelines to help best protect your family:

A Fire Escape Plan May Save You and Your Family

Installing working smoke alarms is an essential, but they don't save lives unless everyone knows how to get out of the home safely. Make sure everyone knows how to escape when the smoke alarm sounds, whether awake or sleeping at the time. In your plan, have two ways out of each room, a prearranged meeting place outside and, most importantly, ONCE OUT—STAY OUT! 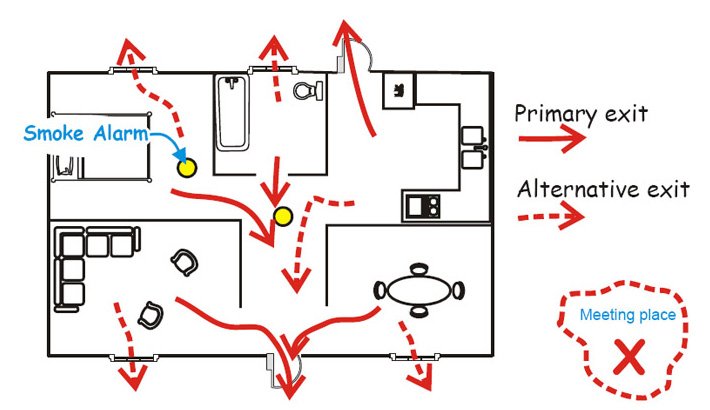 Follow these steps when developing a fire escape plan for you and your family:

Safe Practices and Preventing a Fire in the Home

There are more than 300,000 residential fires a year. Working smoke alarms are a key factor in surviving a fire, but safe practices in the home are the first line of defense in preventing a fire from ever starting. Many residential fires and fire-related deaths are preventable. A fire can occur in anyone's home and does not discriminate against age, race, or education.

The type of structure and the furnishings in a home play key roles in the type and progression of fire. It is difficult to accurately predict the type of fire that might occur in your home, but some simple safety steps can help reduce the risk of fire and better protect your family.

Safety around cooking appliances
Cooking equipment accounts for the largest percentage of residential fires. Because of oils used these fires are most often flaming fires. However, normal cooking can also produce steam, smoke, and fumes that set off alarms. Disabling a smoke alarm to silence frequent nuisance alarms could be a fatal mistake. Instead, moving the smoke alarm farther away from the cooking appliance may help prevent nuisance alarms and still provide adequate detection of the small fast moving fires that occur in the kitchen.

Follow these steps to prevent cooking fires in the home: 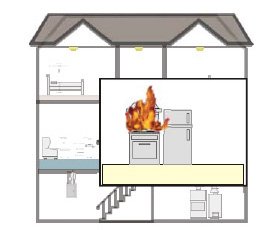 Follow these steps to prevent heating and cooling appliance fires in the home: 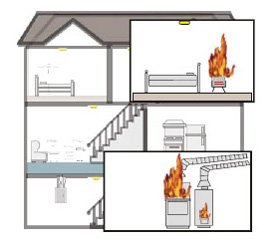 Follow theses steps to prevent electrical fires in the home: 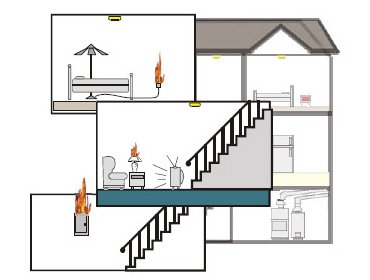 Safety around upholstered furniture and mattresses
Upholstered furniture and mattresses and bedding are the items first ignited and involved in the greatest numbers of fire deaths. These items are commonly ignited by open flame products (such as candles, cigarette lighters, and matches) or smoking materials (primarily cigarettes). Young children playing with matches and lighters are often involved in starting these fires and, unfortunately, are also their primary victims.

Follow these steps to prevent fires in the home: 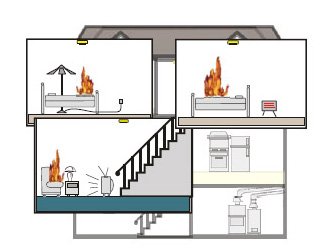 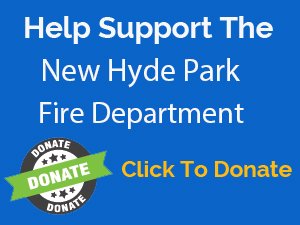